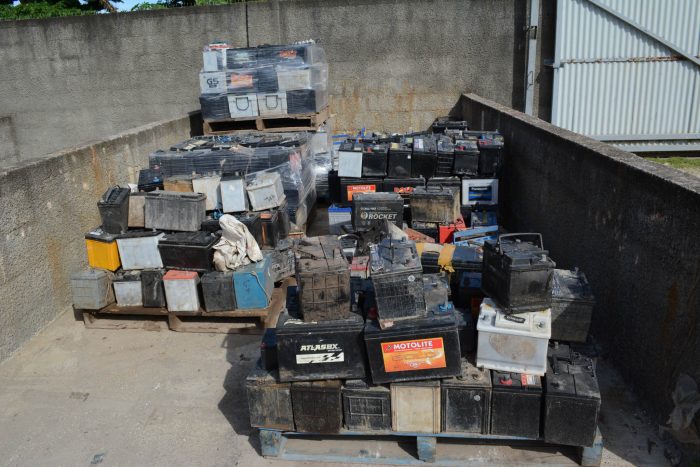 The following article appeared in the Daily Post on Saturday 24th March:

This week five containers full of used lead-acid batteries will leave the RecycleCorp yard in Bladinere and will be on their way to a battery recycling facility in Korea. This shipment is the first of its kind out of Vanuatu under the Basel Convention. You might never have heard of the Basel Convention and when the Vanuatu Government ratified it in July last year, the news might have passed you by. But it is good news for Vanuatu because just 10 weeks after this legal instrument came into force on 15thJanuary, we are shipping out over 5000 used batteries.

The Basel Conventions on theControl of Transboundary Movements of Hazardous Wastes and Their Disposal came about after it was discovered that unscrupulous operators from developed countries were dumping toxic waste in eastern Europe and the developing world in the 1980s. The convention, which came into effect in 1992, was designed to stop this “toxic trade”. Because used lead acid batteries are considered hazardous waste, even though there is a market for them to be recycled and they are not being shipped abroad to get dumped, they are still subject to the conditions set out in the Basel Convention and cannot be shipped to or though any country that is a party to the conventions without the correct permits. This meant thatbefore Vanuatu became a party to the Basel Convention, it effectively prevented batteries being recycled. But now the situation is resolved, and RecycleCorp is happy to take your old batteries and send them away to be recycled.

Batteries are essential and our trucks and solar panels would not work without them. But when they come to the end of their useful life they can pose a health and environmental threat. The acid inside the battery can leak out and corrode whatever it comes into contact with. Lead is poisonous, can cause blindness and it has been shown to have detrimental affects on brain development in children. Whilst the batteries are working with the acid and lead protected by the casing they don’t pose a threat but if the casing is broken and the contents escape problems can occur. It is much better for used lead acid batteries to be recycled than be left in the back yard, in the environment or even the landfill. This shipment of batteries is going to a facility in South Korea that will recycle the acid, the lead and even the plastic casing that encloses the batteries. The danger is gone and the resources inside the battery are not wasted and will be reused.

You might not think that Government ratifying an international convention on toxic waste means anything to the ordinary man and woman on the street. But in this case the effort by the Department of Environmental Protection and Conservation and the Ministry of Foreign Affairs to ensure this convention is recognized in Vanuatu law means that ordinary people have a proper means of disposal for a potentially dangerous product and we, our children and our environment are safer because if it and valuable resources are not going to waste. Andrew Hibgame, director of RecycleCorp, said, “We are very pleased to have worked closely with the Department of Environment and Foreign Affairs to overcome what was an impediment to recycling and are happy that Vanuatu can now properly and safely recycle another product”

If you have any used lead acid batteries that would like to dispose of you can call RecycleCorp on 5547147. They will pick them up and will pay a small amount for them. More information about what RecycleCorp recycles is available on www.recyclevanuatu.com. If you would like to know more about the Basel Convention or DEPC’s waste programmes please contact Roselyn Bue onrbue@vanuatu.gov.vuor visit the DEPC websitehttps://depc.gov.vu

How to find us